The cat’s name is Loofie.

I met Alice “Loofie” Aloof in 1995 at the Juneau pound.  Eagles thin the stray cat population in Alaska; there were only four felines awaiting adoption.  Loofie stood out because she had no interest in us.  She was trying to figure out how to unlatch the cage.  While other cats napped, she was planning an escape.

She was a young adult cat when she moved in and took over. The only history the shelter could share came from the property manager who’d brought her in after a tenant had left her behind.  He guessed she’d been in the apartment alone for four days.

Perhaps it’s because she was abandoned, but she likes to come on trips. She attracts lots of attention at rest areas, walking around on leash.  Pet friendly Motel 6 is her accommodation of choice. 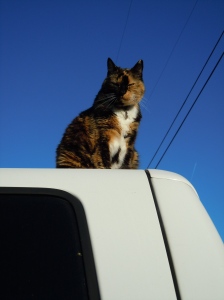 Recently Loofie joined me at a Bob’s Beach Books event in Lincoln City Oregon.  I was there to sign books, but Loofie got all the attention.  Everyone who visited opened the conversation with “What’s your cat’s name?”

She’s a senior citizen now, but  still a charmer –  tolerant of  excessive petting from children (and adults too).  I heard  sad tales from cat aficionados  who’d recently lost beloved pets. They came to see Loofie for their “kitty fix”. She did not disappoint.