A year after its publication, a reviewer in Canada wrote this about “Wax.”  Maybe it’s time to start thinking about a sequel!

WAX, by Therese Ambrosi Smith, is a story inspired by Rosie the Riveter and the women who stepped up, and into the industrial void that was left when practically an entire generation of American men went away to war. They became silent partners in the war effort, the cogs and the gears of the American war machine, and without their efforts the solid foundation, upon which the war was being fought, would have crumbled.

Waitresses, sales girls, and homemakers, these women braved the unknown to be a part of something bigger than themselves, and end up learning that they were never small to begin with.

By setting the novel during a time in American history when women were encouraged to step out of the kitchen, literally and metaphorically, and into roles that they would never have been allowed to pursue during peacetime, Smith challenges her characters, and readers, to question the very nature of gender limitations, and expectation.

The war effort itself could easily have become a major character in this novel but, instead, Smith does a magnificent job of simply placing the story, and its characters, in an historically, and emotionally, relevant context. She recognizes how much potential there is for character growth in her chosen setting and uses that as a vehicle to take her characters places they normally wouldn’t have gone; making them see things in themselves that would have otherwise stayed hidden beneath their mother’s hand-me-down aprons.

And then, just as the characters adjust to their new realities as welders, painters, and dozens of other normally male-dominated professions, with financial and emotional independence, the war ends and these women are expected to somehow fit themselves back into their old lives and expectations.  That is where the novel really spreads its wings and starts to fly.

The relationships these characters have with each other, and with themselves, are so real and honest that they jump from the page, and make you care about them as though they were long-cherished friends. I found myself in every character in this book, their fears and their joys, their ambitions and their self-doubt―these characters cry and breathe and laugh, and hold a mirror up to our own era, with its lingering biases and  judgements.

While this time in American history is, undoubtedly, significant in a thousand ways, I probably would not pick up a textbook to read about it. I want to read about people. The stories and characters within historical fiction often seem provided simply as a pretext for teaching people about the chosen historical era.  What delighted me about WAX is that Therese Ambrosi Smith uses the era to the teach the characters and the reader about themselves.

Touching and funny, with good pacing, and amazing characters, WAX is a novel that only disappoints in that it ends too soon, and doesn’t have a sequel waiting in the wings.

Posted in Blog. Bookmark the permalink.

The cat’s name is Loofie. 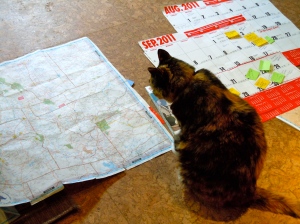 I met Alice “Loofie” Aloof in 1995 at the Juneau pound.  Eagles thin the stray cat population in Alaska; there were only four felines awaiting adoption.  Loofie stood out because she had no interest in us.  She was trying to figure out how to unlatch the cage.  While other cats napped, she was planning an escape.

She was a young adult cat when she moved in and took over. The only history the shelter could share came from the property manager who’d brought her in after a tenant had left her behind.  He guessed she’d been in the apartment alone for four days.

Perhaps it’s because she was abandoned, but she likes to come on trips. She attracts lots of attention at rest areas, walking around on leash.  Pet friendly Motel 6 is her accommodation of choice.

Recently Loofie joined me at a Bob’s Beach Books event in Lincoln City Oregon.  I was there to sign books, but Loofie got all the attention.  Everyone who visited opened the conversation with “What’s your cat’s name?”

She’s a senior citizen now, but  still a charmer –  tolerant of  excessive petting from children (and adults too).  I heard  sad tales from cat aficionados  who’d recently lost beloved pets. They came to see Loofie for their “kitty fix”. She did not disappoint.